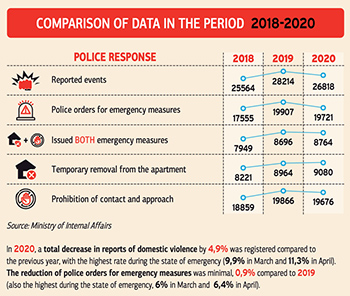 For the ninth time, the Autonomous Women's Center presents a report on independent monitoring of the implementation of the Law on Prevention of Domestic Violence in Serbia for the period January-December 2020, which also contains comparative data from the previous year. There are still no consolidated, publicly available, official reports on the application of the Law, and the lack of a central electronic record on the application of the Law makes it difficult to monitor it comprehensively and fosters inconsistent and incomparable data from different sources. The ninth independent report was prepared by Tanja Ignjatović.

The SARS-COV 2 epidemic affected Serbia, as well as the whole world, which resulted in long-term epidemiological security measures during the state of emergency and the extraordinary situation. Contrary to expectations, this stopped the growth of reports of domestic violence events in 2020, so that in total there were 4.9% fewer registered instances compared to the previous year. It is important to point out that this did not lead to a reduction in police orders for emergency measures, which were only by 0.9% lower in numbers for the whole year than in the previous year. These (positive) trends during 2020 were followed by prosecutorial assessments and proposals for extended emergency measures, as well as court decisions.

Epidemiological measures, changed modes of work and (probably) a reduced number of executors, but also the lack of equipment of state bodies and institutions for work in emergency circumstances that last a long time, have affected the reduction of the number of coordination and cooperation group meetings by 7.6% compared to 2019. This resulted in a reduction of the number of developed individual plans for protection and support to victims of violence by 9.9%.

Based on the analysis of data on the implementation of the Law on Prevention of Domestic Violence and other relevant reports, a number of recommendations have been drafted.

You can view the full report HERE.

You can see the infographic with key data HERE.