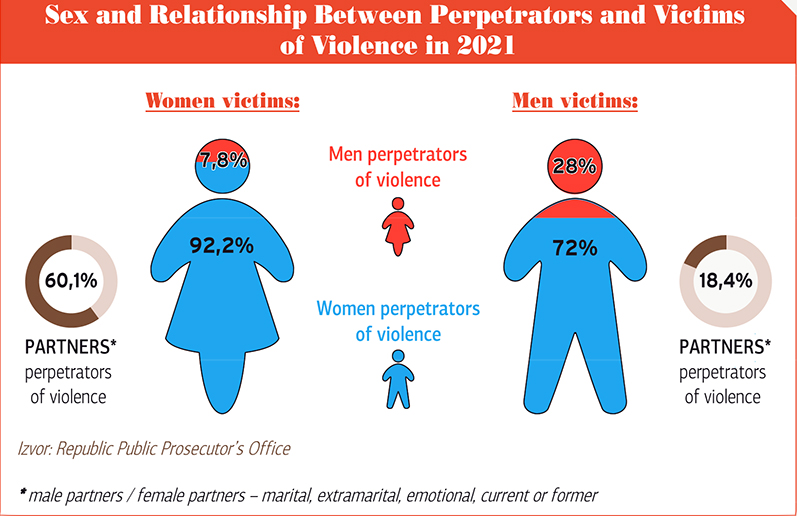 The increase in the number of reports of domestic violence events stopped, and the number of events in which the police assessed the risk decreased. The number of police orders was quite similar to the previous year, but there was a significant decrease in the issuance of both emergency measures and significantly fewer temporary eviction measures, probably as a result of fewer risk assessments.

There was a stabilization of the number of domestic violence cases noted at the meetings of groups for coordination and cooperation, but it does not correspond to the real needs and the number of reported events. Newly reported cases were prioritized, and individual victim protection and support plans were insufficiently monitored, i.e., current ones, as well as long-lasting cases.

Victims were rarely present at group meetings, and it remains unclear how much the plans met their real (complex) needs, but also who (and if anyone) informed them about the content of the plans. When it comes to the relationship between the sex of the victim and the sex of the perpetrator of violence, the data unequivocally confirms the gendered nature of these acts. Kinship ties between the victim and the perpetrator were dominated by partner relationships, which is also a stable fact.

It seems that the resources of the system were exhausted for preventive protection (emergency and extended emergency measures), so long-term protection measures, criminal procedures, and individualized support plans for victims of violence were lacking.

As in previous years, it is clear that in order to improve the implementation of the Law on the Prevention of Domestic Violence, it would be necessary to conduct a series of targeted qualitative analyzes of the actions of all key actors (police, prosecutors, court, centers for social work).

It would be important to significantly improve the resources of the system - the number of people, knowledge, time, and finances, which are currently exhausted for preventive protection (emergency and extended emergency measures), so that there is a lack of long-term protection measures, criminal proceedings, and individualized plans to support victims of violence that are monitored (for a long period), as well as the presence and active position of victims at the meetings of groups for coordination and cooperation, which was all the purpose of the Law.

All of the above justifies the need to establish a central (electronic) record, which would consistently consolidate data from key sources (police, prosecution, courts, CSW). The recommendation that the Council for the Suppression of Domestic Violence undertakes the activities and competencies for which it is competent is reiterated. It is also to be expected that this body, at least once a year, will prepare a publicly available report on the implementation of the Law, with concrete proposals for improvement.

During the five years, these recommendations have not had any effects, so we can only hope that every time the representatives of the Government talk about domestic violence, we will remind them of unfulfilled obligations, which affect safety, well-being, health, and often, the life of victims of domestic violence in Serbia.

You can see the report HERE.

You can see the infographic with the most important data (and comparative data from 2019-2021) HERE.