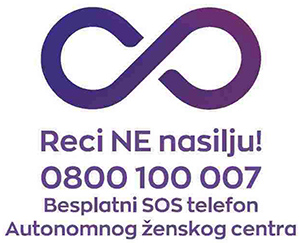 On the occasion of the International Day of Elimination of Violence against Women, AVON, as part of the Say NO to Violence Against Women campaign, called on the media to publish the AWC SOS telephone number on their front pages that day, to which four dailies responded.

At the same time, UNDP in Serbia has launched the #TičeMeSe (I do care) campaign aimed at raising public awareness of violence against women in the family context. The special focus of the campaign is on the role of citizens as observers, neighbors, not to ignore and report suspicions of violence, i.e., to show understanding and help women and girls who are exposed to violence. As part of the campaign, a video and a poster were made showing the SOS telephone number.

The Autonomous Women's Center would also like to thank all the associations that recognized the importance of an anonymous, free and independent SOS hotline for women with the experience of violence and promoted this number on social networks.