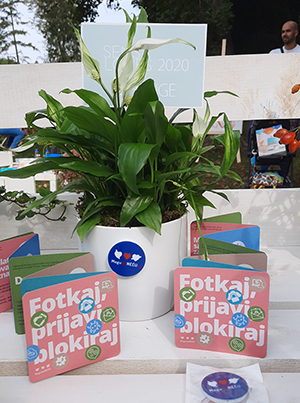 This year's CHANGE award for activism and contribution to the community of Sensa magazine was awarded to the campaign "I can choose to say NO - Love is not Violence" of the Autonomous Women's Center. On behalf of the campaign, the award was received by Jovana Markulić, a peer educator and SOS consultant, who said on that occasion that we are proud of this recognition and that we thank the Sensa magazine team for recognizing our work on changing patriarchal patterns.

The campaign “I can choose to say NO” was launched in 2016 as part of the Autonomous Women’s Center prevention program, and its target population are young people, primarily girls, with the aim of raising awareness and preventing various forms of violence against women in partnerships. As part of prevention activities, we held three-day peer workshops for over 1,000 young people in high schools and colleges, as well as a number of short workshops during which we openly discussed gender roles and youth dating partnerships, as well as the problem of sexual harassment.

Lately, we have been especially focused on the problem of digital violence in partnerships, and at this link  you can access Nechupedia - a mini encyclopedia of concepts about digital violence and other content on this topic. We are working on this topic together with partners from Spain, Croatia and Hungary, where the "I can choose to say NO" campaign has also come to life!

We have focused a lot of attention on social networks as a place where young people are most present, therefore we invite you to follow our Facebook and Instagram page.