PUBLIC ANNOUNCEMENT Digital violence in high school students’ emotional relationships: what do teachers think of that?

Most teachers believe that the school should deal with the protection of students from digital sexual and gender-based violence in youth relationships, but few of them are currently involved in preventive activities on these topics.

Violence in the emotional relationships of high school students, especially digital sexual violence, is not a topic that is completely close to high school teachers. This topic is generally not part of professional exchanges among teachers, and it is rarely discussed with students’ parents. However, teachers are extremely interested in finding out more about the causes and consequences of digital violence in partner relationships of young people, i.e. their students.

These are some of the conclusions of the research of the Autonomous Women's Center (AWC) "Attitudes and responses of high school representatives to the occurrence of abuse among young people who are in an emotional relationship", conducted during the spring of this year, which shows that every other teacher who participated in the research does not know whether dating abuse among young people, i.e. their students - a serious problem. 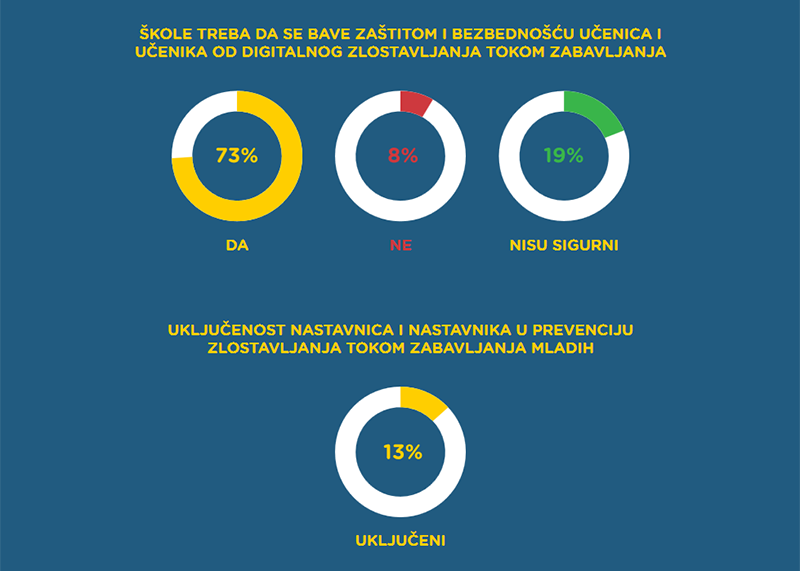 How much do teachers know about the prevalence of digital violence in youth partner relationships?

According to the teachers, the most common form of violence in students' partnerships is psychological violence, followed by physical violence, and the least common is sexual abuse. All forms of violence are many times more common in girls than in boys.

A quarter of teachers are aware that girls have experienced spreading of rumors about them via mobile phones, emails and social networks, as well as that they have received threatening messages and intimidation when they failed to answer their partners’ calls / messages. Only every tenth respondent is aware of two forms of abuse to which young men are exposed: his female partner wrote ugly comments on his profile or spread rumors about him via mobile phone, emails and social networks.

"It should be noted that, according to teachers, girls are disproportionately more exposed to more severe forms of digital violence, such as intimidation by their partners, than boys, in situations where, for example, she does not respond to her partner’s call or message. As many as five times more often, they are threatened that photos which make them feel uncomfortable will be posted on the Internet, or that they will be shared with others, "explains Tanja Ignjatović, a psychologist from the AWC. 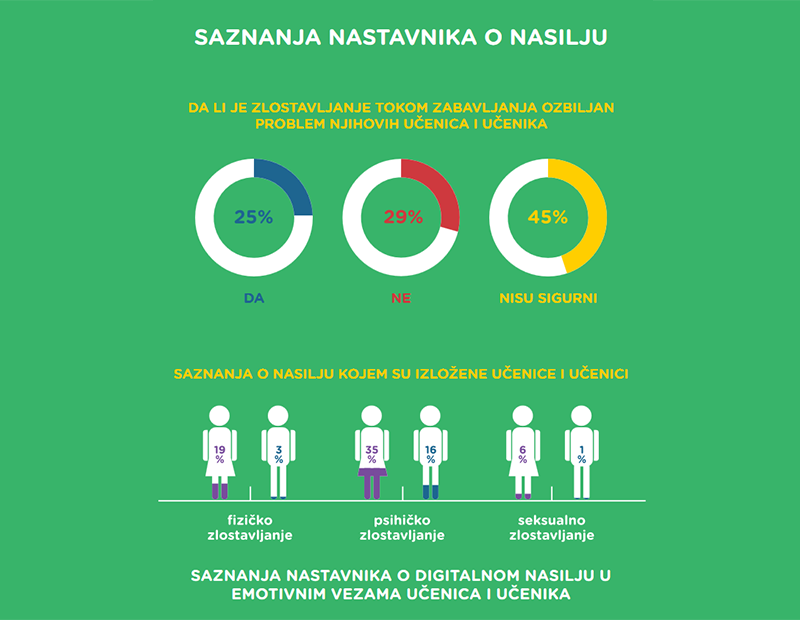 What are the teachers’ attitudes regarding violence in youth partner relationships?

It is encouraging that it is almost unacceptable for all school representatives for a young man to slap his girlfriend, as well as non-consensual sexual intercourse. However, half of teachers believe that girls are just as violent as boys, although numerous studies indicate that they are far more often victims of male violence, and that in cases where boys are victims, the perpetrators are mostly men. Teachers are also generally unaware that young people obtain the first information about sex and sexuality mainly on the Internet and on pornographic sites, although this has been confirmed by data from various studies.

One third of teachers believe that an abused person can easily leave a partnership, which is also contrary to practical experiences, which is often talked about in public by representatives of organizations that provide support to women. The same research conducted in Croatia, Hungary and Spain shows that teachers generally hold the view that victims should not be blamed, but also that they are not sure whether students have enough confidence in them to seek help in case they experience this type of abuse.

Teachers in Serbia mostly (54%) rate their own knowledge of digital sexual and gender-based violence in youth dating relationships as average, and 17% of them say that they have poor knowledge on these topics. "The relevance of these topics and the stated data confirm that the school is an important place to talk about the emotional connections of young people and the prevention of gender-based violence." We should work on improving the knowledge of professionals about the characteristics of this violence and encourage the trust of students to turn to them and seek help in case of need, "adds Tanja Ignjatović.

The Autonomous Women's Center has prepared a range of useful information, attachments, important contacts, as well as successful examples and solutions, to help teachers become adequate support to their students trapped in violent emotional relationships.

The research involved 209 teachers and professional associates from nine schools in Belgrade, Novi Sad, Pančevo, Paraćin and Prijepolje, and interviews were conducted with 15 representatives of the administration in these schools. The research was conducted within the project that is being implemented with the support of the Government of Switzerland and the EU Program "Rights, Equality and Citizenship".

Find out more about the research, as well as the accompanying infographics, at the link: Infografik - Nechupedia.
Latest News
© 2006 - 2021 Autonomous Women’s Center