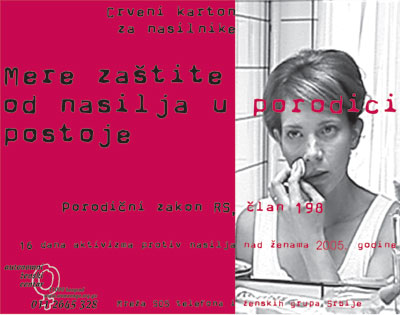 CAMPAIGN 16 days of activism against violence against women, organized by Autonomous Women's Centre and the Network of SOS telephones, with the support of Women at Work and Reconstruction Women's Fund, under the slogan Red card for perpetrators - Protective measures against domestic violence exist! was organized in 50 cities in Serbia. During the campaign we distributed 2,000 posters, 50,000 pamphlets and broadcasted TV spot and radio jingle in the 98 media. In Belgrade, we obtained media sponsorship from six televisions and 10 radio stations for broadcasting video and jingles and 15 print media for advertisement. To the success of the campaign also contributed artists from ACT Women, who performed a street performance in 8 cities in Serbia. In the context of Campaign Voice of differences in cooperation with women's groups organized a public discussion with representatives of institutions in 5 towns.

Family Act of the Republic of Serbia

(1) Domestic violence, in terms of this Act, is the behavior by which one family member endangers the physical integrity, mental health or tranquility of another family member.

(2) Domestic violence, in terms of paragraph 1 of this Act, is in particular:

(3) Members of the family, in terms of paragraph 1 of this Act, are:

(1) A court may order one or more protective measures against domestic violence pertaining to a family member who acts violently, temporarily prohibiting or limiting the maintenance of his/her personal relations with another family member.

(2) Protective measures against domestic violence are:

The procedure in the dispute for protection against domestic violence is particularly urgent.

Criminal Code of the Republic of Serbia, Article 194:

Whoever violates a measure against domestic violence that was imposed on them by the court in accordance with the law shall be punished with imprisonment from three months to three years and a fine.